Start a Wiki
A Close Shave is the first episode and the seventh season.

Duck felt so sad when he came to Edward's Station. He told him all about how Diesel told lies about him and made The Fat Controller and all the engines think that Duck is very horrid. Edward assures to Duck that the Fat Controller will find out what is really going on and asks him to help out with the trucks for the day.

Duck felt very happy when he and Edward set to work with the goods train of trucks. Edward pulls the train while Duck pushes bunker-first from behind and together they had good times working together. Duck also helps push the foreign engines with their train up the hill, but Gordon, Henry and James did not speak to Duck. Meanwhile, Duck helped push Edward and his goods train up Gordon's Hill, and when they reached the top of the hill, Duck says "goodbye"to Edward, and then heads back to the station. Duck enjoys coasting down the hill with the breeze blowing past, and as he was humming a little tune, he suddenly heard the guard's warning whistle. His driver then tells Duck to hurry because there was a breakaway and the trucks are chasing them. There were twenty trucks, that were broken away from Edward, and befure the Signalman could change the points, they intend chasing Duck along the line and intended to derail him as they speed along.

The guard has saved Duck, but the trucks knocked him off the van and as he was left behind, he got up and ran behind the trucks and blew the whistle to attract the driver's attention. But Duck and his crew was far away to hear the guard's whistle and busy trying to speed as fast as they could, that they would catch him gradually. As they raced through Edward's station, Duck whistled furiously, but the trucks caught them with a shuddering jar. As the fireman climbed back, the van brakes were applied with a scream and the driver was gaining control. As they swept round the bend, they saw a passenger train pulling out on their line from the station. Duck tries to stop the trucks by putting ounce of weight and steam against the trucks, so that the accident would never happen, but he was unable to slow down. As they got to the station, Duck shuts his eyes and braces for the crash and was about to run into the coaches when they finally diverted into the siding at the last second, but still carried on.

Ahead, they could see a small shop at the end of the siding, where the barber has set up for his business. He was shaving the customer. Suddenly Duck barreled down the line and crashed right into the front of the shop and completly destroyed the wall. The customer jumped nervously, but the barber saved him and explains that it was only an engine. As Duck peeks into the debris, he apologises to the barber and asks him to excuse his intrusion. But the barber was very cross with Duck for surprising his customer and spoiling his new paint, and so he coats Duck face with the shaving cream as a punishment.

As they helped clear the mess, The Fat Controller came and the Barber told the workmen what he thought. Then, the barber explains to The Fat Controller that he does not like it when engines pops into his wall which disturbs his customer, and The Fat Controller explains that while he understands how upset the barber is, Duck and his crew helped to prevent a serious accident. The barber apologises for his mistakes, and then runs into the shop to fill the basin with water and then rinses the shaving cream of Duck's face. After that he compliments Duck for his bravery, and so does The Fat Controller who tells Duck how proud he is, and that he will tell City Of Truro about Duck, next time when he comes.

After Duck was rescued from the barber's shop, The Fat Controller tells him that he will be returning home after being washed and repaired. Duck felt so worried, believing that the engines still likes Diesel better than him, but The Fat Controller tells Duck that he is no longer in case, as he has never believed in Diesel, ans so he sent him packing, just after Diesel has told lies about Henry when Duck has left. The engines felt very sorry for Duck and wanted him back.

A few days later, Duck came home fully mended with a shining coat of paint, where the other engines welcome him back with happy whistles. The Great Western engine proudly takes his place alongside them, feeling happier than ever to be home with his friends 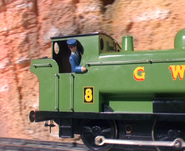 Retrieved from "https://thomastherailwayseries.fandom.com/wiki/A_Close_Shave?oldid=35678"
Community content is available under CC-BY-SA unless otherwise noted.