Start a Wiki
Bulldog is the eighth episode of the thirteenth season.

One morning,Percy is feeling very impatient.He has a new coat of paint to show off until he complains that his driver is late.Gordon and Henry remind him the driver is not late,rather James said that Percy was awake early.Thomas assures Percy that it will soon be time for work,but warns him to be careful,or else he might run into danger,and Duke will not be there to save him.Toby is surprised to have their hero mentioned,where a large painting of Duke is hanging in the engine shed.Thomas decides to tell them a story his driver told him.Long ago,back on the Mid Sodor Railway when Sir Handel and Peter Sam were new to the line, those days they were called Falcon and Stuart and were painted blue and green. The Manager came to see Falcon and was very pleased with his work so far, and now wanted him to learn about the mountain road, which was the most difficult part of the line. The next day, Falcon would have a new coat of paint then go on the Mountain Road with Duke to double-head a train. Falcon felt very cross because he was having to work with Duke, who he considered a fusspot.The next day,Duke told Falcon that the Mountain Road was difficult and said that he will lead,but Falcon told Duke that he did not want the view blocked.Duke told Falcon to not mind the view,and tells him to look at the track and they set off,but Falcon ignored Duke thinking that he was fussing over nothing.They soon approached a tunnel,but Falcon did not like the tunnel,and once everything is safe,but Falcon ends up derailing and is hanging dangerously over the edge.Duke‘s driver and fireman worked quickly to anchor Falcon safe again.However,Duke‘s fireman found more problems,Duke was out of water.Soon everyone passes jugs,buckets,kettles,and saucepans filled with water until Duke’s thirst is quenched.Duke is building more strength,and he is able to pull Falcon back onto the rails,and when they arrived at the top station,the passengers all said that Duke was a hero who would not let go of Falcon.Falcon is grateful and thanks Duke for saving him.Duke was modest and told Falcon that it would have been a shame if his new coat of paint had been spoilt. 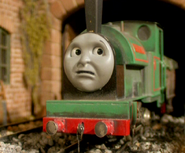 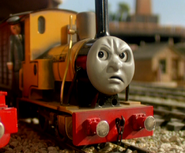 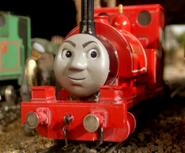 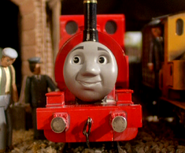 Retrieved from "https://thomastherailwayseries.fandom.com/wiki/Bulldog?oldid=36613"
Community content is available under CC-BY-SA unless otherwise noted.