Start a Wiki
Dirty Objects is the ninth episode of the seventh season.

Toby and Henrietta are settling into their new lives on the Island of Sodor, but they look old-fashioned when they needed new paint. But James felt very cross when he came into the station calling them "dirty objects". This has offended Toby so much that he asks James why he is red, and James tells Toby that the reason was because he is a splended engine ready for anything, and never dirty. Toby then teases James about the time he has had an incident with bootlace (making a hole on one of the coaches that needed to mended with a bootlace), which makes James very angry.

Later, at the end of the line, James leaves his coaches and sets off for his next train. He picks up a line of trucks for a slow goods train at each station. James was in a very bad mood, because he hates pulling slow goods trains. Although the trucks starts off behaving well, James was still very rough with them that they end up being determined to pay him back. As he was climbing Gordon's Hill, James was asked by his driver to stop to get his brakes pinned down, and he should have remembered the time he has had his accident with his trucks on his first day, but James forgets about it and was too busy thinking of what to say to Toby, next time he meets him. Seizing their chance, as soon as James reached the top of the hill, the trucks starts pushing James down the hill. Unable to stop, James speeds through the station and crashes into a couple of tar tankers that were left at Maron station.

Luckily, James wasn't badly hurt, but he was covered from smokebox to cab in a sticky tar, and the tar tankers were completely damaged and in pieces. When Toby and Percy came to help clear the mess, Toby makes fun of James reminding him that, as a red engine, he is supposed to look splendid and ready for anything. But James just ignores them. Percy and Toby then rescues a very dirty, meesy and sticky James and takes him back to Tidmouth sheds, where The Fat Controller was waiting. He thanked Toby and Percy for rescuing James, and then tells James that he should be sent to be cleaned.

The Fat Controller awards Toby a new coat of paint and agrees when Toby requests one for Henrietta too. Toby happily runs off to tell his coach the good news while James remains silent, knowing full well that today he is the "dirty object." 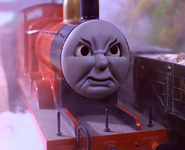 Retrieved from "https://thomastherailwayseries.fandom.com/wiki/Dirty_Objects?oldid=36887"
Community content is available under CC-BY-SA unless otherwise noted.