Start a Wiki
Diesel’s Devious Deed is the sixth episode of the fourth season.

When Duck returned to the yard, he was so horrified to hear that the trucks were singing rude songs about Diesel. So he tells the trucks to shut up and bumps them hard. When Diesel came in, Duck tells him that the trucks were being rude, but Diesel felt so furious and accuses Duck for making them laugh at him.Henry says that Duck would never do things like that and that the other engines have differences and they never talk about it.Gordon and James think it is disgraceful and disgusting and Henry thinks it is despicable.Diesel hates Duck and wants to send him away and makes a plan and decides to tell lies.The next day,Diesel speaks to the cars and tells them that they like jokes and they a good joke about Diesel yesterday and laughed and sniggered away.The trucks decide to get back at Duck for bumping him and laugh rudely at Gordon,Henry,and James as they pass by.They soon found out why and Henry decides that they cannot allow it and consult together.Duck is tired out and wants to rest in the shed.When he turns on the turntable,the three engines refuse to let him in and James tells Duck to keep out.Duck tells him to stop fooling around,but James talks back and tells Duck back that he is tired of him and likes Diesel and doesn’t like Duck at all and tells Duck that he tells tales about him to the cars and they start to argue.Sir Topham Hatt comes to stop the noise.Gordon thinks that Duck called him a “Galloping Sausage”,James who is called “Rusty Red Scrap Iron“,and Henry fumes and is called “Old Square Wheels”.Duck considers and he tells gravely that he thought of those names himself and says “If The Dome Fits”.Sir Topham Hatt recovers and tries not to laugh and asks Duck if he did that.He tells Sir Topham Hatt that it is certain that no steam engine would be mean.When Diesel lurks up,Sir Topham Hatt tells him that he heard what Duck had said.Diesel tells Sir Topham Hatt that he can’t understand it and he is dreadfully grieved.Sir Topham Hatt understands everything.Diesels just squirms.Sir Topham Hatt apologises to Duck and sends him to see Edward at Wellsworth Station and knows that he will be glad to see him.Duck puffs sadly away,while Diesel smirks with triumph. 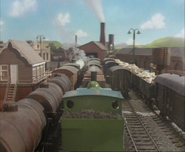 Promo.
Add a photo to this gallery

Retrieved from "https://thomastherailwayseries.fandom.com/wiki/Dirty_Work?oldid=35931"
Community content is available under CC-BY-SA unless otherwise noted.