Start a Wiki
Duck and Dukes is the seventh episode of the thirteenth season.

Duck tells Peter Sam that there are no Dukes, having all been scrapped. Peter Sam, who remembered the Thin Controller said the Duke of Sodor was coming to Skarloey and Rheneas' hundredth birthday, is horrified, and when he tells the others, they argue over who is right. (Peter Sam may have been thinking of Duke from the Mid Sodor Railway, but we don't know Sir Handel's reaction.) But the next day, the engines are happy when they wake up, for it's Skarloey and Rheneas' birthday. Later, Peter Sam takes the television train and films Rheneas. After Skarloey arrives and takes the Duke around the new loop line around the Lake, the Duke makes a speech, during which Peter Sam interrupts and asks him if he is real. The Duke tells him he is, and Rheneas makes a speech asking everyone to visit his and Skarloey's respective twin brothers, Dolgoch and Talyllyn. 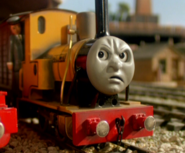 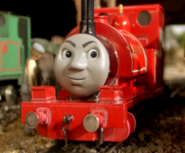 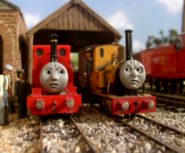 Retrieved from "https://thomastherailwayseries.fandom.com/wiki/Duck_and_Dukes?oldid=33459"
Community content is available under CC-BY-SA unless otherwise noted.