Edward's Exploit is the first episode of the eighth season.

Bertie the bus is giving some visitors a tour of the Island Of Sodor.It was the day when Edward was taking several visitors to visit Bill and Ben at the China Clay Works,but he had trouble moving the heavy coaches,which were packed full of so many passengers.Henry was asking if Edward was struggling,James remarks it to be painful,while Gordon was grumbling that it is time for Edward to retire. Duck and BoCo got very cross and takes expectation to this and defended him, knowing that Edward is capable of far more than he seems.Finally, Edward manages to start the train and then leaves the station.Edward brought the train to the junction where the passengers meet Bill and Ben and were delighted to see them being photographed and then take the party to the China Clay Works in a break van special.Everyone has a splendid time which makes the visitors most impressed.Then Edward takes the visitors home until the weathers changes with wind and rain,which causes Edward’s fireman to drop sand on the rails,until something breaks with a shrieking crack.Edward’s driver tells him that they have taken his side rods off and asks him to take the people home because they will start back tonight.Edward then promises that he will try to do it.But he cannot start the heavy train,which makes the passengers anxious.Edward’s crew makes adjustments between the couplings and loosen them so that he pick the coaches up one by one,just like the same thing when pulling freight cars.Edward manages to start without his side rods and steams into the station where Henry is waiting for the visitors with the special train.Excited passengers cheer and thank Edward,then his driver and fireman.Late that night,Edward weary returns home to the sheds,when Duck and BoCo saw that Edward was left in peace,while Gordon and James remained respectfully silent and out of respect. 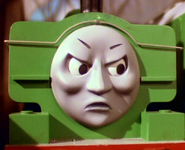 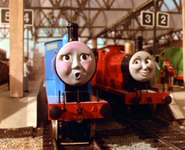 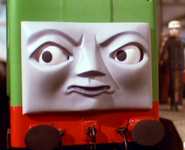 Retrieved from "https://thomastherailwayseries.fandom.com/wiki/Edward%27s_Exploit?oldid=34471"
Community content is available under CC-BY-SA unless otherwise noted.