High-Speed Gordon is the fouth episode of the first season.

Donald told the engines about high-speed trains, but Gordon remarked that he could go faster than "those smelly boxes on wheels". The next day, Gordon still boasted about it. The day after, snow had fallen, and an icy film covered the rails. When Gordon started to pull the express away, strangely, he moved a yard then couldn't move nor stop!!! The driver and an inspector tried every trick they knew, but Gordon didn't stop until he ran out of steam. Donald had to help Gordon back to the sheds, Henry came to pull the express, and workmen replaced the rails that Gordon had been running because Gordon's wheels had worn deep grooves into them. That night at the sheds, a voice made fun of Gordon for his incident which made Gordon cross. 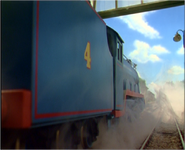 Retrieved from "https://thomastherailwayseries.fandom.com/wiki/High-Speed_Gordon?oldid=34585"
Community content is available under CC-BY-SA unless otherwise noted.