Off the Rails is the tenth episode of the seventh season.

One morning, Gordon was resting his eyes at the station while nothing to himself that being important can sometimes be very tiring, yet he must keep up on his appearance. Henry came up rudely and wakes him up. Gordon got very cross, thinking that the engines who causes an accident should be respected. Then, Percy came up and innocently asks Gordon if jammed brakes and burst safety valves has caused an accident. Gordon denies it and tells Percy that those sorts of malfunctions could happen to any engine, not like Henry who came off the rails.

It was Henry's day to take the Express. Gordon warns Henry to be careful and stay on the rails and then Henry puffed away. Gordon yawned and went back to sleep, but his driver came to wake him up and to tell him that he has to take the Special Goods Train. Gordon becomes very cross and refuses to take the special train, so he rather think of pulling coaches instead.

Gordon's fire couldn't burn well, so Edward came to push him to the turntable to be turned around. Gordon complained for the whole day and Edward settles him down when they reach the turntable.By that time, the movement has gotten Gordon's fire burning well and making steam. As the turntable was moving around, Gordon grumbles that he is doing anything that can stop him from taking special regardless of the consequences. When the turntable gets halfway round, he moves forward in an attempt to jame it like last time. However, Gordon was unable to stop as he slide down some unused rails and fallen into a ditch. Gordon was horrified and wanted to get out, but his crews were very cross with him for his silly actions and refuse, telling him that he is stuck.

In the office, Sir Topham Hatt has received a phone call and told everything that has happened. Seeing Gordon from his window, he arranged Edward to take the special train and decided to leave Gordon where he is for now, until someone rescues him. Meanwhile, some boys came and teased Gordon by singing a song to leave him humiliated. When the school bell rang, the boys laughed and ran away.

Gordon stayed in the ditch for hours without any rescue until late night. After the extensive work of preparing the road of sleepers to keep him out of the mud, Henry and James pulled Gordon out of the ditch and back on the rails.

Afterwards, a filthy and disgraced Gordon crawls back to the shed and became sadder and wiser for his experience. 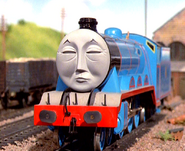 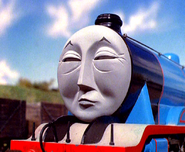 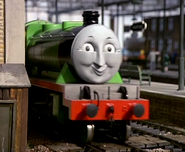 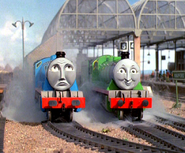 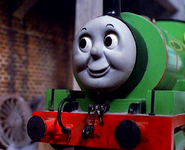 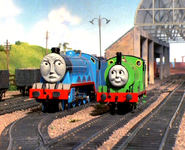 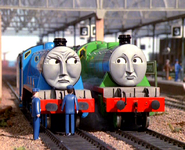 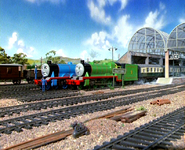 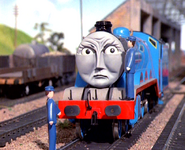 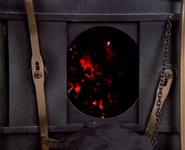 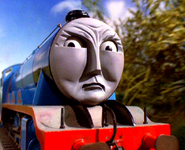 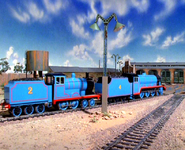 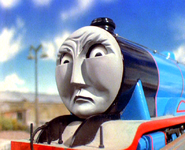 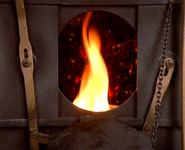 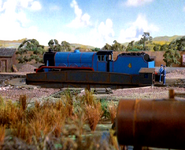 Retrieved from "https://thomastherailwayseries.fandom.com/wiki/Off_the_Rails?oldid=35639"
Community content is available under CC-BY-SA unless otherwise noted.