Paint Pots and Queens is the fifteenth episode of the eleventh season.

When Thomas and Gordon arrives back to the sheds (after Thomas has fallen down the mine), they discovered that there has been painting happening in the sheds. The Fat Controller then tells the engine that the Queen is coming to the Sodor to visit the engines, and the engines were wondering that who will pull the Royal Train. Edward says that he is too old, Gordon says that hie is in disgrace and James thinks he will be choosen for sure. But Henry disagrees with that and claims that James can't climb hills. Then Henry boasts that he would be chosen to pull the Royal train and get a new coat of paint.

The next day, it was raining. Henry's driver and fireman cover the cab to keep dry from the rain at Knapford, and the painter was on the ladder above the line. Henry's smoke suddenly blew high into the air, which makes it much harder for the painter to see, as he and the paint pots fell all over Henry. The painter felt very cross with Henry for spoiling the paint with the dirty smoke. Then The Fat Controller arrived and tells Henry that he looks like an iced cake, which will not do for the Royal train, and so he waks away to make other arrangements. Henry felt so upset with this.

When Gordon and Thomas sees The Fat Controller, Gordon asks him whether Thomas could have his branchline again, and Thomas asks him whether Gordon could pull coaches again. The Fat Controller understands that the engines are sorry, and so they deserve a treat. Then he assures to the two blue engines that Thomas will look after the coaches, Edward will go in front to clear the line and Gordon will pull the Royal Train, which makes Gordon and Thomas feel so happy.

The next day, it was a very great time when the engines were very busy bringing in people from all over the island for the special occasion, and Thomas sorts out the coaches in the yard. Later, Edward steams into the station and tells everyone that the queen has arrived. Gordon, who was very spotless with his brass shining, has arrived with the Queen and her train. As he brings the train inside the station, The Fat Controller stands to attention and welcomes the Queen as she gets off the train and onto the platform, and she thanks all the engines for giving her a splendid ride. When Percy whistles and Toby rings his bell for cheering, Henry and James angrily tells them to shush, trying to enjoy the event in peace. But Toby and Percy ignored them and carried on the noise, ending up prompting the other engines to join in. 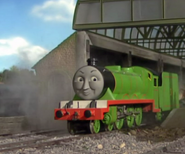 Retrieved from "https://thomastherailwayseries.fandom.com/wiki/Paint_Pots_and_Queens?oldid=34155"
Community content is available under CC-BY-SA unless otherwise noted.