Oliver Owns Up is the fourth episode of the sixth season.

After Oliver was rescued, he and Isabel were repainted in Great Western colours, joined by another coach called Dulcie, who was also rescued, and started working on the Arlesburgh branch. The engines are amazed at Oliver's adventures, and say approving things to him, making him proud and over-confident, but Oliver meets his match after a load of disgruntled ballast trucks push him into thell. After Duck and Sir Topham Hatt speaks to him, he is left feeling very silly.A few days later from the works,Oliver returns home a wiser engine and knows how to handle trucks. 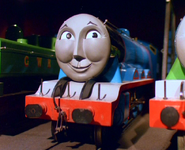 Retrieved from "https://thomastherailwayseries.fandom.com/wiki/Resource_%26_Sagacity?oldid=34419"
Community content is available under CC-BY-SA unless otherwise noted.