Start a Wiki
Toby's Seaside Holiday is the third episode of the first season of the Railway Series.

The Fat Controller's family first met Toby in East Angilia, and when Toby's line was closed, The Fat Controller heard about it, and brought him to Sodor. Before that, Toby worked at a harbour with his brothers. The harbour was busy and engines had to bustle about. Toby never had the chance to excersise his pistons properly until he had his own line to run on.

One day, Toby was resting in Ffarquhar Sheds with Percy, who had been talking about the harbour at Knapford which made Toby remember when he used to work at a harbour too. Now, Toby can't bustle about like he used to with never a chance for a holiday. He rememberd, however, going to the seaside once for a while.

His crew were excited that morning and told Toby they were promised a trip to the seaside. Toby's driver explained that the seaside has a festival each year  They wanted engines that year and Toby was to be one of them. Toby was polished until his driver could see his reflection and remarks that Toby hadn't looked so smart for years. Toby set off to the junction where the branch line to the village began. As they arrived, an old engine came in. He was younger than Toby but was very dirty. Toby volunteered to help the engine pull his next train to the seaside. The stationmaster agreed and Toby was coupled in front. The old engine explained that festival time is the best time of the year. At the seaside station, the stationmaster stared, frowned, then turned away shaking his head.

The next day, Toby was excited. He saw the sea sparkling. Toby gazed up at the sky and saw some seagulls. He decided to ask his driver what they were when he came. When the driver came, he sadly told Toby that he was out of the show since there is nowhere for Toby to stand. Toby is very disappointed and said that he's fine where he is; in the shed. Toby's driver explained that he thinks it just was an excuse and the real problem was that Toby was too smart and the owners were afraid he'll shut their branch line up.

Just then, a door banged and Toby stopped thinking about the seaside. His driver explained that it was  time to get back to work.Toby sighed and puffed away from the shed and decided that he's still grateful to got the seaside at all; even  though The Fat Controller would've handled  it much better. 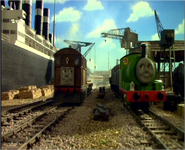 Retrieved from "https://thomastherailwayseries.fandom.com/wiki/Toby%27s_Seaside_Holiday?oldid=36435"
Community content is available under CC-BY-SA unless otherwise noted.