Toby's Tightrope is the first episode of the twelfth season.

The Manager became very stern with Mavis, and tells her off for going down to Toby's line without working at the quarry. Mavis then calls Toby a fusspot again, which makes the Manager feel more angry as he was telling her that Although Mavis is a very good engine, she still does not understand why she cannot go down the line.

The siding arrangement in the quarry was very awkward for Mavis, as she was forced to shunt the trucks in the correct position. After Mavis has finished all her work, she was ready to leave the quarry, and so she asks her driver that the work would be a lot easier if she could use a small part of Toby's line. Her driver, suspecting nothing, agrees and allows her to go as far as the first level crossing.

Later, the weather has changed with snow and ice melting away. This has caused an increase in a lot of hard work and Mavis takes her trains so that she can be so long and has to fo beyon ght elevel crossing. She was planning to go further down the line without making it look like her fault and asks the trucks to bump her at the level crossing. The trucks agreed to what Mavis says, however, things went wrong when Toby arrives while Mavis was gone, and decides to shunt the trucks himself. The trucks decide to bump Toby instead and, so when Toby reaches the level crossing the trucks started to give him a bump and push him down the line.

Melted ice and snow has made the river on Toby's line become a torrent as it washes away and destroys the crumbling bridge with the log colliding within it, but it left the rails behind which forms a tightrope across the abyss. Toby and his driver tries to stop, but they were out of control when they reached the bridge, by the time he was able to stop, he was on the "tightrope" precariously above the water. Toby was preparing to fall any second, as more pieces of the bridge started to crumble in the torrent. 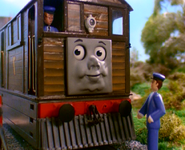 Retrieved from "https://thomastherailwayseries.fandom.com/wiki/Toby%27s_Tightrope?oldid=35694"
Community content is available under CC-BY-SA unless otherwise noted.